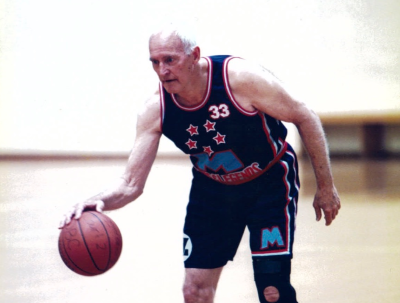 In 1972 Jim Klein and his wife, Mary, moved to Yarraleen, a small domestic pocket in Bulleen.

A neighbour asked Jim if he knew anyone who could play basketball. Jim volunteered that he had played top basketball in Ballarat but had not played for years. He was willing to sign up for the Yarraleen over thirty-five if the competition was not too serious.

That was the start of Bulleen basketball for Jim, an association that would last over 50 years. At that time, the local base consisted of one court at the Sheahans Road tennis courts and park. When the stalwarts of the Yarraleen squad passed into their fifties, they decided to establish a men’s and a women’s team to participate in the Australian Masters Games. The response from the local players was overwhelming, and they took players to the first Australian Masters in Perth in teams from over 35 to over 50.

The Committee included several Yarraleen residents such as Jack Gibson, John Warton, Ashton Wallace, John Reilly, Don Roberts, and Jim in the early days. They organised everything, including uniforms, players, team registration, accommodation for players and family members and a club dinner.

At this stage, the participation in the Australian Masters Games was on a local club level, and they had learnt that the internationals had considerable numbers of retired professionals in their ranks. Jim recalls, “the competition was of a far higher calibre than we expected. I believe we played against national teams from Europe, Russian satellites and America. We were at this stage all amateur teams and seemed to do better in the older age groups.”

When the Myths and Legends Club — made up of retired local professionals and well-known names like Eddie Palabinscus, John Heard and Mike Dancis (who played in the 1956 Olympics) — struggled to get players, they invited a few Bulleen players to join them. Subsequently, the Bulleen Masters Teams, in the appropriate age groups, amalgamated with the Myths and Legends, retaining the Myths and Legends name but establishing their base in Bulleen.

The original Bulleen squad participated as a vital part of the Myths and Legends in nearly every subsequent national and international Masters Games, winning numerous medals.

Despite these successes, Jim’s most satisfying tournament was watching* the Bulleen girls win the Australian Under 14 National Championship. His granddaughter, Isobel Anderson, was voted the most valuable player. *edited 2 June 2022

Today Jim still lives with Mary in Bulleen in the same house he built and is happy to watch his grandchildren, Isobel and Sid, play basketball for Bulleen. However, the family forbids him to talk to the coaches, so he chats to the players’ parents. And that was how I came to know of Jim’s long and notable involvement with basketball in Bulleen.